The 4 decade long India-Bangladesh enclave saga has been concluded by the monumental 119th Constitutional Amendment Bill (100th Constitutional Amendment in effect), which was passed by the Indian Parliament on 7th May. While there are 198 enclaves in total (106 Indian and 92 Bangladeshi), the agreement which was put in effect by the Constitutional amendment settles the position of 162 enclaves. Out of these 162 enclaves, India gets 51 Bangladeshi Enclaves, constituting an area of around 7,110 acres, while Bangladesh gets 111 Indian enclaves, constituting an area of around 17,160 acres.

What is an enclave?

Colloquially speaking, an enclave is a island land of one country surrounded by the land of another. An enclave under international law is generally understood to be a part of the territory of a state that is enclosed within the territory of another state whose inhabitants are culturally and ethnically distinct. A prominent example of this is the Vatican City, which is territorially surrounded by Italy. As one can see, their existence is rare and abnormal in the international scheme of state order as they defeat the very idea of contiguity of territoriality of a nation state. They usually pose difficulty in governance and even have the potential to threaten international peace, which is why states prefer to either dispose of the contentious land by agreement or sale or by an international accord.

The issue of enclaves, though complex in itself, is not as simple as its definition seems to be. Enclaves often have counter-enclaves, which is an enclave in an enclave. Say there are two countries, A and B. Country A has an enclave in Country B, say en-A. Now, a counter enclave would be an enclave of country B in this en-A. Still confused? Take a look at this diagrammatic representation. 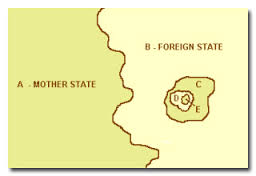 This does not stop here. There are also counter-counter enclaves, which are enclaves of one country in the counter-enclave of another. So, it is basically, enclave in an enclave in an enclave (Inception, anybody?). This was the case with Dahala Khagrabari which was an Indian counter-counter enclave, famously known as the Cooch Behar enclave. A schematic representation of the same is:

The issue of citizenship rights becomes a major concern in such cases. It was prominently so in case of India-Bangladesh enclaves. People who had been as per law living on Bangladeshi land were surrounded by India culturally, infra-structurally, and by spirit. These enclaves could not get any direct benefit of governmental policies, therefore, they lacked basic amenities such as school and hospitals for which they were dependent on India. The story of Indian enclaves in Bangladesh is the same. It is not that these people are not recognised by the state Internationally as it’s citizens, but an air of uncertainty looms over their rights, also the territorial fragmentation more often than not leads to splintered application of law and policy. That is, legally they are recognised but in effect the populace of such enclaves is stateless.

Historically speaking, enclave legally was first discussed in the Treaty of Milan (1526). Since then, state practice regarding enclaves has grown and they are an accepted phenomena under International Law, albeit with hesitancy. Enclaves, as one can historically observe, are international concerns primarily from the economic and political point of view, more than legal; they either prosper economically and gain political ground, such as Hong Kong which became a showcase of free trade and globalisation by the time it was handed over by the British to People’s Republic of China, or they sink like in the case of Indo-Bangladeshi enclaves. Although there are finer legal intricacies involved in every example of an enclave taken here, the underlying international realities are not starkly different. Take the example of Sokh, an Uzbek enclave in Kyrgyzstan, the home for some 40,000 people, at a distance of a mere five kilometers from Kyrgyzstan proper. In just a few years, the combined effect of the proactive enforcement of border controls, the laying of unmarked minefields, and the threat of a guerrilla invasion, has led to a sense of siege. There is an obligation on the concerned states to solve out the issue of enclavity if it is leading to problems of economic, social and cultural character. This directly entails a liability under Article 1(3) of the UN Charter which calls for “… international co-operation in solving international problems of an economic, social, cultural, or humanitarian character…”.

Indo-Bangladeshi enclave swap was untenable till 1971, due to Pakistan’s control over Bangladesh’s territory. However, the after Bangladesh’s independence Indira-Mujib Agreement had promised the end of border conflict regarding enclaves, but the agreement was marred by internal jingoistic land politics in India. Probably, because India was facing a net loss of 40 sq. km if it swapped the territories, but such a loss is infinitesimal when compared to the territorial certainty and international relief  it brings with itself. However, the conclusion of the agreement favourably has resulted in a greater good not only for India and Bangladesh, but also for the affected populace of these enclaves who were effectually rendered stateless and deprived of exercising the leverage which territorial certainty would have given them with respect to cultural, social and economic matters. Most of the existing enclaves are a result of traditional complexities, like in the case of Belgium’s Baarle-Nassau/Baarle-Hertog enclaves. Hopefully, the Indo-Bangladeshi agreement will pave a way for others to follow and solve their territorial problems with respect to enclaves and also bring attention of concerned international actors towards the obligations which states have under international law to address the issue if it is leading to social, economic and cultural subjugation of the populace living in these enclaves.

One thought on “Enclave-tion: An analysis of the Indo-Bangladeshi Agreement”